Learn About the Seven Women of Mason 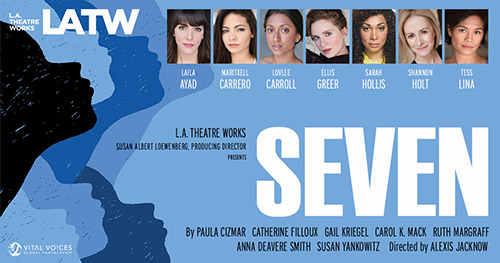 SEVEN depicts the successful initiatives undertaken by seven extraordinary women from across the globe.

Composed by seven noted playwrights, the documentary play SEVEN depicts the successful initiatives undertaken by seven extraordinary women from across the globe. While facing tremendous personal risk, they overcame significant obstacles in order to secure and enhance human rights for women and girls in their home countries of Pakistan, Nigeria, Ireland, Afghanistan, Guatemala, Russia, and Cambodia.

The inclusion of the L.A. Theatre Works production of SEVEN in the Great Performances at Mason 2019/2020 Season inspired members of the GMU Center for the Arts to identify extraordinary women within the GMU community, “who have stories of overcoming adversity, influencing change, and pursuing transformation in their communities” (CFA Website).

The Website Introductions
Having conducted a successful search for the Seven Women of Mason, the project team has been introducing these motivated leaders and innovators, one-by-one, to the GMU community during the seven weeks prior to the performance of SEVEN. Each week a new video has been added to the CFA website (cfa.gmu.edu/seven-mason-women) wherein one of the seven tells her own story.

Interactive Exhibit at the Johnson Center
The project includes an interactive exhibit located on the food court level of the Johnson Center in the middle of the Fairfax Campus.  Over the past several weeks, each of the Seven Women at Mason has been introduced there through a display of her portrait on an easel and an accompanying handout summarizing her achievement. Visitors to the exhibit have the opportunity to respond to questions relating to the challenges of leadership by posting notes on a display board. The exhibit, including these anonymous notes, will be moved to the Center for the Arts Lobby just before the performance of the play SEVEN, on Friday, October 18, at which time audience members may view the exhibit as well as add their own voices to the already-posted commentary.

The Seven Women of Mason – Their stories in brief (CFA Website) *

The Seven Women at Mason – a Project in line with CFA Themes and Goals
This project reflects an enduring theme voiced by CVPA Dean Rick Davis: “Arts create community.”  It also connects with the goals Programming Manager Adrienne Bryant Godwin set out during the Season Preview of the 2019-2020 Great Performances at Mason Season: increasing “audience engagement” and “working to expand on the arts experience” of CFA patrons.

Audience Engagement before and after the L.A. Theatre Works Production of SEVEN on Friday, October 18, 2019

The Pre-Performance Discussion (45 minutes prior to the performance on Monson Grand Tier) will feature Alyse Nelson, the Chief Executive Officer of the "Vital Voices Global Partnership." SEVEN was created with the support of the "Vital Voices Global Partnership," the preeminent non-governmental organization (NGO) that identifies, trains and empowers extraordinary women around the world by unleashing their leadership potential to transform lives and accelerate peace and prosperity in their communities (CFA Website).

As a special treat, the CFA audience is also invited to Post-Performance Cocktails and Conversations in the CFA lobby with members of the cast, moderated by Associate Professor of Theater Kristin Johnsen-Neshati.