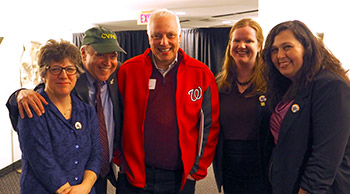 A preview of the 2019/20 Great Performances at Mason season took place on April 3.

A group of Friends of the Center for the Arts celebrated the announcement of the 2019/2020 season of Great Performances at Mason on April 3rd in the lobby of the Center for the Arts (CFA) Concert Hall. We exchanged friendly chatter as we gazed up at the array of festive new posters along the Grand Tier II balcony walls. We munched on a suite of hors d’oeuvres, each chosen to match the style of one of the 2019/2020 Great Performances at Mason, and sipped champagne cocktails, wine, and other beverages from the bar. We relaxed at small tables amidst the soft glow and ambiance of a charming supper club, complete with background jazz music provided by College of Visual and Performing Arts musicians. Also, there was time to enter the annual door-prize drawing whose winners were to be announced just prior to desserts and coffee.

Then, with great anticipation, we took our seats in the Concert Hall to be greeted from the stage by several presenters well-known to the Friends.

Using video clips, Adrienne described each performance and highlighted some of the initiatives of the new season:

The question and answer portion of the entertainment included an enjoyable taking turns by Rick, Adrienne, and Betsy Yancey, Audience Services Manager, calling out their choices of not-to-be-missed performances by some of next season’s first-time performers at the CFA.

Be sure to read the Great Performances at Mason 2019/2020 Season brochure which has been mailed out to the FCFA membership and note the return of some popular standards as well as the slate of “new-to-the CFA” performers. And don’t forget that the website cfa.gmu.edu also has detailed descriptions of each performance, and, as Betsy had reminded Friends in the audience, be sure to take advantage of the subscriber tips detailed in the brochure. Also, note that, from now and at least through June, the website will include videos of the artists at work, to help you make selections to enjoy during the exciting new season ahead!