Having grown up between Minnesota and Mexico, Lila Downs holds great pride in her expansive heritage of being the child of a Scottish-American father and Mixtec mother. In an interview with Reforma magazine, Downs recalls her mother, a singer as well, giving her advice when she was young, “Lila, canta con sentimiento o no cantes. Lila, sing with feeling or don’t sing at all.” Whether it’s a full-throated mariachi song, achingly tender bolero, or sultry jazz tune, Downs does just as her mother advised and pulls audiences in with her authentic charisma and storytelling.

Not only has she won a GRAMMY award for Best Regional Mexican Music Album with her 2011 album Pecados Y Milagros, but she’s additionally won five awards with the Latin GRAMMYs between 2005 and 2017. If you find yourself in Mexico City, keep an eye out for Downs’ star on the Walk of Fame at the Auditorio Nacional.

Drawing from her multicultural background, Downs’ songs often focus on justice, immigration, and women’s issues. In a recent interview with NPR about her song “Dark Eyes,” Downs speaks of her mother’s continuing influence on her work, stating, “My mother is an Indigenous woman who migrated with my father to Minnesota ... and so I think I live through her vision and through the concern that she always had to not forget her origin, and therefore my origin.” Standing up for overlooked essential workers, especially those that are Indigenous, this topic is one of many that Downs demonstrates a strong passion for. Downs’ official YouTube channel features “Dark Eyes” with lyrics offered in both English and Spanish.

Women’s History Month last month provided many opportunities for everyone all over the world to celebrate women from the past, present, and future. One of the millions celebrating was Lila Downs, who NPR honored as one of the world’s most powerful Latinas. As previously noted, she finds great inspiration from her mother, but also honors her maternal grandmother, Matilde Sánchez. As a former vendor of the traditional Mexican drink pulque, Sánchez represented a classic hardworking woman, one of which Lila Downs notes “taught [her] what is sacred about life.” 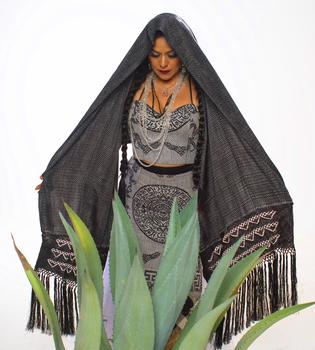 On International Women’s Day, Downs honored women everywhere by posting a performance of fragments from poet Rocío García Rey’s “Mujer Colibrí” (“Hummingbird Woman”). The poem, written by a fellow Mexican woman involved in activism through the arts, details violence against women, both past and present, and asks that past victims not be forgotten. Just as Lila Downs had made a point to remember those of Indigenous culture who have faced injustice, Downs makes a similar statement for women all over the world.

In an interview with Radio Canada, when asked if Downs felt that she has disrupted the music industry with her musical activism, she laughs and says, “I hope that I have. I love to break the expectations even though it's hard and it feels like you're constantly swimming against the current, but it's worth it because you are creating … I hope that we are able to do more and disrupt some more of the patriarchal musical lanes.”

Lila Downs' "Cariñito," a collaboration with Panteón Rococó and the Mexican Institute of Sound Mix, to promote education for women:

Topics
CFA
Center for the Arts