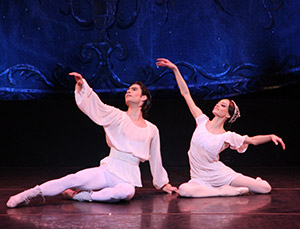 Two elegant and distinctive touring ballet companies will visit the Center for the Arts in March, hailing from very different regions. The Russian National Ballet will perform two ballet classics (Romeo and Juliet/Carmen) in a single program on Saturday, March 7, at 8 p.m., followed by Cinderella on Sunday, March 8, at 2 p.m. Then two weekends later, Ballet Folclórico Nacional de México de Silvia Lozano will delight audiences with their colorful performance on Saturday, March 21, at 8 p.m. As we draw closer to their performances, the Center for the Arts reflects on the history of the art forms.

Classical ballet came to the forefront of the performing arts world during the early European Renaissance of the 16th and 17th centuries.  Under the patronage of aristocracies, many productions were staged at royal courts. By the 19th century, dancers were being schooled in intricate dance conventions, and the Russian ballet school began to establish its special place in the classical ballet genre. In 1989, dancers from the Mariinsky Theatre in St. Petersburg and the Bolshoi Ballet in Moscow founded the Russian National Ballet, and in 1994, the Bolshoi’s principal dancer, Elena Radchenko, was named its first Artistic Director. According to the Columbia Artists website, the company used “new-found creative freedom to invigorate the tradition of Russian Ballet with new developments in dance from around the world,” and the company’s focus became one of “upholding the grand national tradition of the major Russian ballet works.”

Classical Ballet, which typically depicts a well-known story or fairytale in sumptuous and elaborate style, has proven its staying power. The productions appeal to the hearts and minds of all ages and across many generations. Some patrons enjoy seeing the same classics again and again, as a means of celebrating nostalgic traditions, or just because they a bring sense of comfort and joy.

As its name suggests, Ballet Folclórico or folkloric ballet emanates from ‘the people’ rather than the upper echelons of society. In an article in the ReVista Harvard Review of Latin America, writer Rebecca Cantú notes that “Ballet Folclórico Méxicano is not any one particular style of dance, but rather, an amalgamation reflecting the regional and ethnic diversity of Mexico. Indeed, the term encompasses all of the various traditional regional dances.”  In the particular case of Ballet Folclórico Nacional de México de Silvia Lozano, founded in 1952, the Columbia Arts Website notes that it is “an institution tasked with the dissemination, preservation and promotion of the Culture of Mexico, both at home and abroad,” and “reflects the work of Mexico’s leading researchers and practitioners of folklore, dance, music, and costumes.” A recent attribution in praise of the de Silvia Lozano production states, “The traditions and customs of Mexico are showcased in this grand performance filled with colorful and lavish costumes, enchanting music, and fascinating rituals.”

Treating ourselves to one or all of these classical ballets and Ballet Folclórico productions, whether for the first time or “nth” time, may have us humming “they should have danced all night…!

Written by Evelyn Kiley, special contributor from the Friends of the Center for the Arts