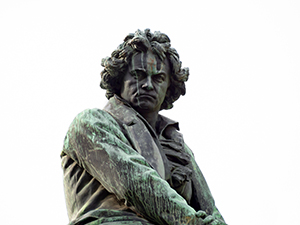 “This spring, the Fairfax Symphony Orchestra is proud to join orchestras around the world in celebrating the 250th Anniversary of Beethoven's birth,” says Music Director and Conductor Christopher Zimmerman. “We've dedicated two concerts to the musical genius—the first on March 14 with a special, curated program of highlights, and the second on April 25, featuring Beethoven's magnificent Ninth Symphony, with more than 100 voices of the Fairfax Choral Society.”

The first concert on March 14 at 8:00 p.m., is aptly called Beethoven at 250: Soulmates, as the program, not only commemorates the 250th anniversary of Beethoven’s birth, it recognizes the special connection between Beethoven and Johannes Brahms. It’s no secret that Beethoven profoundly influenced Brahms, and although Beethoven died five years before Brahms was born, Johannes Brahms was considered by many as the master’s musical heir. This was no easy feat, as Scott Simon of NPR said, “For a composer of classical music, coming after Beethoven was a little bit like following Picasso or Michael Jordan. Critics and audiences would say he's good, but no Michael Jordan.” The exhilarating program of works by both composers includes Brahms’s Piano Concerto No. 2 and Beethoven’s “Symphony of Symphonies,” featuring highlights from Symphony No. 5, No. 7, and No. 3 “Eroica.” Internationally renowned French pianist Philippe Bianconi joins the FSO as guest soloist on the program. Bianconi has been described as an artist whose playing is “always close to the soul of the music, filling the space with poetry and life” (The Washington Post).

The second FSO concert on April 25 at 8:00 p.m.—Beethoven at 250: Peace & Joy—pairs Beethoven's magnificent Ninth Symphony, which will feature more than 100 voices from the Fairfax Choral Society, with the regional premiere of Symphony No. 4 by Baltimore-based composer Jonathan Leshnoff. Beethoven’s glorious final symphony celebrates the bonds that unite humankind and has been described as his “great vision of the future.” Jonathan Leshnoff’s Symphony No. 4 is a powerful new work written for the Violins of Hope, a collection of restored instruments that survived the Holocaust. Leshnoff draws inspiration from the ancient Jewish mystical text, Heichalos, to explore spiritual and ethical questions at the heart of the Jewish experience.

In 2018, the FSO launched a collaboration with Leshnoff, who has been distinguished by The New York Times as “a leader of contemporary American lyricism,” Leshnoff is renowned for his music's striking harmonies, structural complexity, and powerful themes. His works have been performed by more than 60 orchestras worldwide in hundreds of orchestral concerts.

Before the March 14 and April 25 concert, join Christopher Zimmerman and special guests at 7:00 p.m. for MORE THAN NOTES, an informative and lively discussion of the works and composers