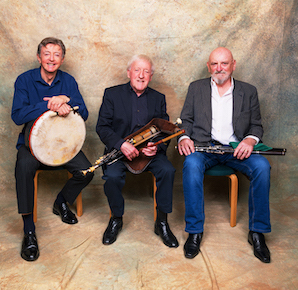 The Chieftains perform The Irish Goodbye on Thursday, March 19 at 8 p.m. at Center for the Arts.

The final stop on The Chieftains: The Irish Goodbye tour is Mason’s Center for the Arts on March 19 at 8:00 p.m. In a lively evening of music, stories, and dance, The Chieftains will share the stage with the Mason University Singers, dancers from the O’Neill James School of Irish Dance, and the Northern Virginia Firefighters’ Emerald Society Pipe Band.

Also joining the Chieftains in their final The Irish Goodbye tour performance is retired NASA astronaut and flutist Catherine “Cady” Coleman, who famously traveled to the International Space Station with a pennywhistle and Irish flute from The Chieftains’ Paddy Moloney and Matt Molloy. Coleman is a veteran of two Space Shuttle missions and has logged 159 days in space.

Bringing together the community to celebrate Irish heritage is the goal of their “The Irish Goodbye” tour. Band leader Paddy Malone, the top traditional folk musician in Ireland and around the world, explains that “in each city, we perform with local Pipe and Drum bands, Irish Dance schools, choirs, and special guests—the whole shebang! It’s always fun to showcase local talent to their hometown crowds.” The Northern Virginia Firefighters’ Emerald Society Pipe Band will open the evening with a rousing march to welcome the audience and The Chieftains, and the Mason University Singers will join in on the fun for several numbers, including crowd favorite “Shenandoah.”

Just what is an Irish Goodbye? Some say it’s an abrupt departure from a party without telling anyone, and others say it’s a lengthy farewell ceremony that includes prolonged conversations, plentiful sing-alongs, and keening sendoffs because an Irish person cannot be the last to leave a party without telling anyone. As for which meaning The Chieftains intend for their tour, they are not saying.

The Chieftains joined the traditional music party nearly six decades ago in 1962. Since then, they have won six Grammy Awards and are highly recognized for reinventing traditional Irish music on a contemporary and international scale, and their music remains as fresh and relevant as when they first began.

The Chieftains: The Irish Goodbye:
Thursday, March 19 at 8:00 p.m. at Center for the Arts