Dean Davis Dishes About The D.C. Premiere of Rags 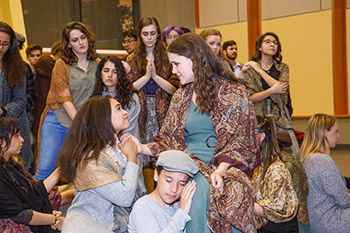 The company of RAGS performs an excerpt at the 14th Annual ARTS by George!

Presented by Mason’s School of Theater and School of Music

“It’s not every university that gets the chance to work on a major musical during its developmental process,” shares Rick Davis, Mason’s Dean of the College of Visual and Performing Arts, but that’s exactly what Mason’s School of Theatre and School of Music students are doing for their upcoming collaborative production of Rags, which runs from October 31 to November 3, 2019, at the Center for the Arts.

With book by Joseph Stein (Fiddler on the Roof), music by Charles Strouse (Bye, Bye Birdie), lyrics by Stephen Schwartz (Wicked), and a newly revised book by David Thompson, Rags tells a heart-warming story of loss and hope surrounding a group of Jewish immigrants as they arrive to start a new life in America at the turn of the 20th century.

Participating in a D.C.-area revision is not only exciting for our student artists, but it’s also a great thrill for Davis, who directs the production, with musical direction by Joe Walsh and choreography by Ahmad Maaty.

Davis took time to talk with the Center about the production.

Can you tell us what drew you to Rags as a director?

DAVIS: I am drawn to works of scale and sweep—in theme, action, language, and (when possible), music. That's why much of my work has been in opera, musical theater, and the classical repertory such as Shakespeare, Marlowe, and Ibsen. Rags is a big show in all of those ways. It has the dramatic momentum of a full-scale musical and the thematic heft of a classic.

As a story of the immigrant experience in America, Rags couldn't be more timely to perform in the D.C. area. The core of the show is built around the story of a group of Jewish immigrants from Central Europe who emigrate to New York in 1910—it wouldn't be wrong to think of them as, in a way, the people of Fiddler on the Roof after they've escaped from Anatevka—and find all the obstacles and opportunities that confront new Americans then and now. There's an intimate, familial quality to the central characters that plays in counterpoint to the busy, freewheeling, dangerous world of New York City that swirls around them.

Because Mason is such a diverse and international campus, and because the immigration story today is truly a global one, and because we believe there are common, even universal threads that unite so many varieties of the immigrant experience, we have cast a large, diverse, international ensemble. The early-20th-century world of the play is intact, but it's embodied by the faces and voices of our contemporary world, which makes the larger themes come alive in every scene and song, connecting them to the present without any overt "updating."

DAVIS: There are no tricks to fall back on, no traditions to honor or reject, except those that belong to the genre as a whole. I find that liberating, and it's hard work, too. You have to invent it all. Fortunately, this version is the evolutionary product of two strong professional productions (Goodspeed Opera House in Conneticut and Hope Mill Theatre in the U.K.) so the script and score fit easily into the mouths and voices and bodies of the performers.

DAVIS: We have a strong commitment to new writing and writers, dating back to the days of Theater of the First Amendment, our award-winning resident professional company that operated from 1990-2012 and produced dozens of world premieres and engaged actively in new play development. A culture of support for writers continues in the College of Visual and Performing Arts, as for example with the annual "Mason Players Originals" program, featuring an evening of short new works created entirely by students; strong coursework in writing for both stage and screen; and various formal and informal workshops and readings throughout the year.

How did Mason get the chance to work with the show creators on this new adaptation?

DAVIS: Sometimes, it's not what you know; it's who you know. The librettist for this new version of Rags is my brother-in-law—David ("Tom") Thompson. Thanks to his willingness to advocate for us (and to make sure the script and score were ready in time!), we were able to do the show in the middle of its commercial development process, which is leading toward a full production in London sometime this coming season.

Have there been any additional changes/tweaks to the script or music since rehearsals began?

DAVIS: The script (and score) changed some between both of the two most recent professional stagings of this new version—some major re-ordering of scenes and numbers, for example, happened after the Goodspeed production, making the whole show tighter and leaner. Tom and I have been in close contact about the script, and he has been very generous with notes and wise counsel and advice. So far I haven't pestered him with any script notes, but we're just getting into the heart of rehearsals now so that may change!

Can you describe the music? Do you have a favorite number?

DAVIS: The musical style is classic Broadway, with a soaring, lyrical feeling in places, an edgy, almost dissonant quality at times, a jazzy/ragtimey flavor once in a while, and all infused by the presence of Klezmer musicians who help remind us that we are in a specific part of New York at a very specific time. My absolute favorite tune is an iconic ballad, "Children of the Wind." It's introduced as a single-line violin melody in the prologue and then developed throughout the piece in bits and pieces until it becomes a beautiful solo for the leading lady and is reprised by everyone in the Finale. It actually brings tears to my eyes every time I hear it, both because of the heartfelt depiction in the text of the immigrants' commitment to making a better world for their children, and the way the tune and its supporting harmonies make emotional sense of that vision.

Can you tell me about the visual for the play? What does the world look like, and what did you want to convey visually?

DAVIS: Our set designer, Debra Sivigny, has created a world that is both specific and abstract. There are many different textures on the stage, most created through fabric of various kinds—you might say that we have woven a tapestry that evokes the tenements and streets of New York without trying to be at all literal. I love the way the set interacts with the big Concert Hall stage, filling it with color and life but not weighing it down with mass or volume. The costumes are rooted in the period and place of the piece for the principal characters, and the ensemble stretches just a little further afield, in keeping with the theme of immigration from around the world.

What do you hope audiences take away from this production?

DAVIS: First and most important is the very personal story of a strong young woman and her brave son making a new life in a difficult world, but one that holds much promise for them. If we tell that story well, all of the parallel stories and ideas will fall into place. Second, I hope that everyone in the theater, on stage and in the audience, comes away with a larger sense of our shared humanity, a renewed desire to live together in a peaceful and loving world. And third (with my professor and Dean hat on), I hope that more and more folks discover the excellent work that is going on in the arts at George Mason University!

Rags presented by Mason’s School of Theater and School of Music, with book by Joseph Stein (with revisions by David Thompson) lyrics by Steven Schwartz, music by Charles Strouse, adapted by David Thompson, and directed by Rick Davis will be performed at Mason’s Center for the Arts from October 31 to November 3, 2019.