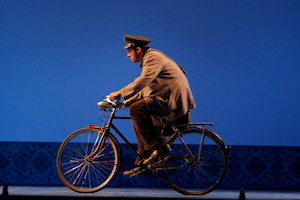 Virginia Opera, The Official Opera Company of the Commonwealth, is gearing up for its second main stage production of the season, Daniel Catán's opera Il Postino (The Postman) on November 16 at 8 p.m. and Sunday, November 17 at 2 p.m. The production is a collaboration with Chicago Opera Theater and Albuquerque’s Opera Southwest and will travel to both locations later in the season.

Based on the 1994 Oscar-winning film, the opera follows a hapless mailman who befriends the Nobel Prize-winning poet Pablo Neruda to help him find the words to reveal his heart to the woman he loves. A new take on a timeless theme of love, friendship, loyalty, and conviction, set against the spiritual and political conflicts of a small Italian village during the 1950s. Sung in Spanish with English Supertitles.

Maestro Adam Turner, tenor Daniel Montenegro, and Stage Director Crystal Manich sat down with the Center to talk about the opera, production details, and their collaboration with Chicago Theater and Opera Southwest.

The composer Daniel Catán is often compared to Puccini—do you agree with this comparison? What will the traditional opera audience member appreciate from this production?

Daniel Montenegro: Catán is often compared to Puccini, and I can see why. They both are melodic and possess beautiful, sweeping lines. However, I believe that once you dive more deeply into his works, you begin to discover that Catán has his own unique sound and style, which is not found in Puccini’s genius but is all his own. I have had the pleasure of performing a majority of his operas, and with that my ear can pick out his sound immediately—it’s truly unique!

Crystal Manich: I agree with the assessment that Catán can remind you of Puccini. He uses music in the same way Puccini does—the themes are repeated to achieve transformation and the forwarding of the characters’ journey. Like Puccini, Catán’s music is accessible to the contemporary ear and, therefore, can be enjoyed by experienced opera-goers, or those who are new to the art form.

How is Il Postino different than a classic opera? What will an opera novice appreciate about this opera?

Adam Turner: The only difference between Il Postino and a so-called “classic” opera it that the ink is still fresh! Daniel Catán’s opera premiered in 2010, and we’re only a decade into introducing the work to opera audiences, though I feel confident it will continue to thrive and hold its own with the “classics.” An opera novice will find all the typical things—vocal beauty, compelling storytelling, a rich orchestral tapestry, captivating design, etc.

Daniel Montenegro: I think a big difference is that it is very cinematic. That is, it moves along like a movie—time is not static—days sometimes pass through/with the music not like in traditional opera where that mostly only happens between the music. A novice will be able to pick that up and follow along with the story with no problem. Also, this allows the plot to move without any real pauses in the story, as in traditional operas.

Crystal Manich: Il Postino sometimes feels like a hybrid of smart musical theater with sweeping passages that remind us of operas by Puccini. We are aiming to match Catán’s musical brilliance with a stunning visual production that will incorporate scenic movement and projections to convey both the simple life of the characters and a heightened consciousness thanks to the transcending poetry of Pablo Neruda.

Can you tell me a little more about the design aspects of the production?

Crystal Manich: The opera is written in a series of mostly short scenes, anchored by some longer scenes. This is a challenge for onstage performance. We have a set that rotates to make the transitions between scenes seamless and lyrical, like the music.

Do you have a favorite aria or duet?

Daniel Montenegro: My favorite aria is Neruda’s opening aria “Desnuda” it’s so beautiful! I wish Mario could sing it! My favorite duet is the first duet with Mario and Neruda; it’s fun to sing and act—it’s kind of a “first meeting” love duet in its own sense actually!

Can you explain the partnership between Virginia Opera, Chicago Theater, and Opera Southwest?

Adam Turner, Conductor: Across the nation, U.S. opera companies are looking for ways to partner together, fostering the next generation of audience members and ensuring the future of opera in the United States. As opera is one of the most complex art forms, bringing together lots of people from a variety of backgrounds (singing, acting, orchestra, sets, costumes, lighting, etc.), it’s also one of the most expensive! To reduce costs, opera companies in recent years have begun sharing certain expenses of productions (particularly sets and costumes). Recent “co-productions” seen by Virginia Opera audiences include The Barber of Seville and Romeo and Juliet (2016), and Salome and La Traviata (2015). Many of these productions were shared with our partners in the field, opera companies such as Portland Opera, Des Moines Metro Opera, Opera Carolina, and a host of others. These crucial collaborations allow us to continue offering our audiences the highest quality artistic product that they’ve come to expect.

Can you tell me more about the importance of fostering a new generation of audience members and how this opera, production, and collaboration aim to do that?

Adam Turner: Ensuring that opera continues to attract and captivate audiences of all ages is absolutely integral to sustaining this profoundly beautiful art form. But most importantly, I believe the “next generation” is looking for stories that reflect their lives and radically changing worlds, connecting them to something bigger than themselves. Opera isn’t a museum art form; many of these tales are timeless and relevant—sex, love, death, corruption, betrayal—every theme of the human experience is represented in these stories. But the impact of the raw human voice, its ability to convey emotional subtext without a single word, just the color and timbre of an unamplified voice supported by a full orchestra—these are experiences that Netflix and Hulu will never capture. This operatic setting of Il Postino, a simple story of love and loss, captures so much more of the humanity in these characters, much more so than the film can portray—there’s just something about the human voice’s ability to go straight to the heartstrings.

Though the opera is set on a small Italian island, the libretto is in Spanish. I understand that the language choice drew mixed reactions from critics, but what is your take on it?

Crystal Manich Spanish is one of the fastest-growing languages in our country, let alone the world. It’s interesting because in the opera world, no one has ever questioned the existence of Italian being sung amongst American and Japanese characters in Japan, as is the case of Puccini’s Madama Butterfly. In opera, the language of the composer and librettist is used to convey a story. Period. It is also my belief that while the opera Il Postino is set in Italy, the story and music are very much rooted in Pablo Neruda’s South American sentiment. My approach to this particular interpretation of the piece is that Neruda’s culture infuses the life of the characters on the Italian island on which he is living.

Adam Turner: Many of the stories from the most beloved masterworks in the operatic canon come from literary sources—La Bohème, La Traviata, Eugene Onegin, Lucia di Lammermoor, Porgy and Bess, just to name a few. But more recently I’ve noticed contemporary composers looking to cinema for inspiration—Lars von Trier’s film Breaking the Waves (adapted by composer Missy Mazzoli), the Pulitzer Prize-winning opera Silent Night (composer Kevin Puts) based on the 2005 film Joyeux Noël, iconic films like It’s A Wonderful Life (composer Jake Heggie) and The Shining (composer Paul Moravec), recent Metropolitan Opera productions of Alfred Hitchcock’s Marnie (composer Nico Muhly) and Luis Buñuel’s Exterminating Angel (composer Thomas Adès), Jean Cocteau’s Orphée (composer Philip Glass, presented at Virginia Opera in 2011-2012), and many more. One of the greatest challenges in adapting these works is the loss of the camera—a camera can capture an intimacy not easily achieved in a large theater, not to mention the typical visual feats associated with great camerawork. But most importantly, a good story is what ultimately resonates with an audience, and some of today’s best stories can be found in the world of cinema. I feel fairly confident that there’s plenty of operatic repertoire out there, particularly adapted from the world of cinema, that’s ready to be introduced to Virginia Opera’s audiences…so you’ll just have to stay tuned!

Virginia Opera: Il Postino
Saturday, November 16 at 8 p.m. and Sunday, November 17 at 2 p.m. at the Center for the Arts
Tickets and more information