An Interview with LADAMA: Mason Artist-in-Residence 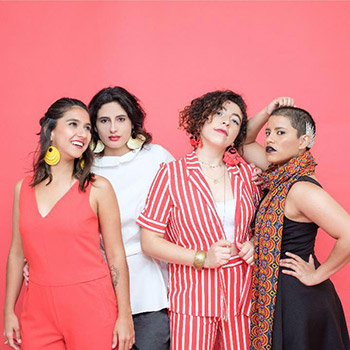 One of our most dynamic upcoming performances on the Center’s calendar is LADAMA on Friday, October 4, 2019, at 8 p.m. This fresh and vibrant quartet is innovating the “Latin Alternative” music scene with their “irresistible spirit and universal appeal,” (NPR). In addition to their public performance as part of the Great Performances at Mason season, LADAMA will participate in a variety of activities and events during their residence from September 30 to October 4 to foster meaningful and transformational exchanges between our communities and LADAMA.

Sara Lucas, a member of LADAMA, took time to talk with the Center about their upcoming week in residence and performance.

What is the best part about creating music with artists from all different backgrounds?

LUCAS: We are constantly learning from and sharing with each other—rhythms, language, and forms of expression. You learn different cultural contexts while embracing diversity, living four realities at one time.

What is the most challenging part?

LUCAS: We are a collective, and so, in a true collective, it sometimes takes longer to make decisions—musical, aesthetic, and regarding our pedagogy in teaching, we all make decisions and are leaders and so consensus is important and necessary. But in the end. we are able to value all of our opinions, talents, and skills.

What are the group’s biggest inspirations and influences?

LUCAS: We are inspired by the students in our workshops, immigrants, movements, and activists who work for gender equality around the world and an incalculable number of musicians and mentors from our communities.

Out of all the places that you have performed together, which have been your favorites? And why?

LUCAS: Teatro Juárez in Barquisimeto, Venezuela because it was our first time in Venezuela, and we were embraced with open arms by the incredible community—the leaders and children—of Cruz Blanca of Maria's home neighborhood. It was a free concert, and it was the first time that many community members had ever been in a theater. We hired buses to bring folks to the show which was produced by Mafer and executed by so many in the community.

In the Canary Islands, Spain in August we performed a free concert in a park for probably 250 people. There were so many different kinds of folks there of all ages and nationalities. There was electricity in the air. Because there had been a fire on the island and the Saharan Winds were coming in from Africa, it was very dry and hadn't rained in a long time. Halfway through the show it started pouring—and they rejoiced saying we brought the rain. When we realized we couldn't play anymore because it was dangerous, we gathered the remaining audience members under a large Eucalyptus tree and continue playing the rest of our set acoustic—dancing and singing with the audience.

Why is the residency significant to you all?

LUCAS: The residency is significant to us because even though we have worked in many universities, this is the first time a university has created programming not only for its students but also for the larger community that it exists in. We can't wait to visit the public schools, for example. This is a model we hope to emulate in the future as we work with other high education institutions. It's also very exciting to show the many facets of what we do, as educators and activists in addition to being musicians, producers, and composers who work in the global music industry. It's never one thing to be an artist. It's a great opportunity George Mason has presented for us with this residency.

What are you looking forward to the most during your residence at Mason?

LUCAS: We are looking forward to connecting with the community, the students, and the audiences that we will work with and perform for. And we hope that everyone feels that they can participate in our shows and workshops—don't stay in your seats or feel obligated to follow concert protocol! We welcome you!

What are you hoping that people will take away from your time in residency and at the concert?

LUCAS: We hope to communicate to audiences and students that they can use creativity, improvisation, and cultural understanding of one's own roots to succeed in any capacity—whether in regards to work, creative pursuits, and being a part of the social fabric of our communities. We also hope to get folks off their feet and feel the music with every part of their beings!

LADAMA performs at the George Mason University Center for the Arts on Friday, October 4, 2019, at 8 p.m. Buy Tickets.