A New Season: Did You Know? 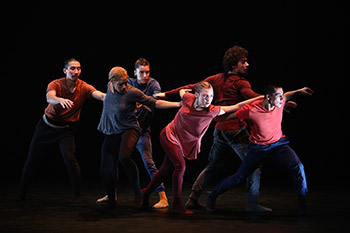 Eight of the shows in the 2019/20 Great Performances at Mason season are appearing at the Center for the Arts for the first time.

The 2019/2020 season of Great Performances at Mason has been announced and it includes many of your favorites from past seasons. But, did you know, not 1, not 2, not 3, but 8 of the shows (including three from the Family Series) are appearing at the Center for the Arts for the first time? Three of them will be covered in this newsletter and the remaining five will be discussed in the May/June 2019 newsletter.

LADAMA is a Latin alternative band of four women musicians and activists—Lara Klaus, Daniela Serna, Mafer Bandola and Sara Lucas, originating from Brazil, Colombia, Venezuela, and the United States respectively. Their music fuses sounds from South America and the Caribbean with soul, R&B, and pop.

DID YOU KNOW ... Members of LADAMA first met In the fall of 2014 at OneBeat—an initiative of the U.S. State Department's Bureau of Educational and Cultural Affairs and curated by “Found Sound Nation”—a fellowship and residency where musicians from around the world can come together to focus on social engagement, sound production, and composition in a collaboration-based setting? Initially conceived by Lara Klaus, Daniela Serna and Maria Gonzalez (LA-DA-MA) with the aim of working within countries in South America, LADAMA grew to include Sara Lucas to reach communities in North America as well. In addition to public performances, LADAMA holds educational workshops in English, Spanish, and Portuguese, where they hope to provide a foundation for participants to "use music as a basic form of personal expression to address issues pertinent to them.”

DID YOU KNOW ... Mafer Bandola (aka María Fernanda González Olivo) is a multi-instrumentalist and songwriter from Barquisimeto, Venezuela? Though she studied the mandolin, the cuatro, and the violin, her primary instrument is the bandola llanera. She was recognized as the world's best female bandola llanera player at the XXVI International Bandola Llanera Pedro Flores Festival in 2018.

DID YOU KNOW ... Lara Klaus is a Recife, Brazil-based drummer, percussionist, singer, songwriter, and educator? Her percussion instruments include pandeiro, alfaia, and zabumba, among others. She has played at numerous music festivals around the world (Montreux Jazz Festival [Switzerland], Latino Americando Festival [Italy], and Samba Festival [Germany]) and taught all-ages workshops throughout South America, Europe and the United States.

DID YOU KNOW ... Sara Lucas is a New York City-based singer-songwriter and guitarist? Before LADAMA, Lucas co-founded the band Callers with Ryan Seaton, with which she produced three full-length albums (Fortune, Life of Love and Reviver) and a seven-inch split with Luaka Bop artist, Delicate Steve. In 2012, Callers was featured on WNYC’s “Soundcheck on Spinning on Air.” The group has since performed at numerous festivals. In 2015 Lucas began serving as a facilitator for production workshops with youth in Brooklyn and Hudson, NY, with “Found Sound Nation” and “Hear Be Dragons.”

DID YOU KNOW ... LADAMA members play a variety of traditional instruments? The bandola is one of many varieties of small pear-shape chordophones found in Venezuela and Colombia. They are related to the bandurria and mandolin. The bandola llanera is traditionally built with only seven frets and four gut strings and played with a pick, but many bandolas being made nowadays can have up to 21 frets, with musicians such as Mafer Bandola using these more extensively fretted versions.  The pandeiro is a type of hand frame drum popular in Brazil, and which has been described as an unofficial instrument of that nation. The drumhead is tunable, and the rim holds metal jingles (platinelas), which are cupped, creating a crisper, drier and less sustained tone on the pandeiro than on the tambourine. The Pandeiro is used in many Brazilian music forms, such as samba, choro, coco, and capoeira music. A zabumba is a type of bass drum used in Brazilian music. The player wears the drum while standing up and uses both hands while playing.

DO YOU KNOW ... Who The Four Tenors are?

ALBERTO URSO. Born in 1997, Alberto studied voice, piano, sax, timpani, and percussion. He is a graduate of the Music Conservatory of Messina, with his Opera Master’s degree conferred by the Music Conservatory of Matera. Alberto has performed on all the major Italian television stations and has participated in the famous RAI television program “Ti lascio una canzone,” receiving the Print Award as best interpretation of the song “Tu si na cosa grande.” Alberto subsequently toured with the troupe “Ti lascio una canzone” in Canada and the United States, performing in the principal Arts Centers of Montreal, Toronto, Atlantic City, and Connecticut. He has also performed in Australia, on a tour produced by “Pina Cataldi.” In 2017 Alberto was the prize winner of the Katia Ricciarelli International Opera Competition.

FEDERICO SERRA was born December 22, 1987 in Italy. From a young age he displayed an aptitude for music and singing, inspired by his parents and his older brother. At just 11 years old, he won his first pop music competition in Italy. At 17 years old, Federico enrolled at the Liceo Musicale of Varese with specializations in opera singing and piano. He began a long period of in-depth study of the musical discipline with masters of the caliber of Vito Maria Brunetti, Gianfranco Cecchele, Federico Longhi and Alfredo Zanazzo. Thanks to his commitment and results achieved, Federico in 2014 made his debut at the Donizetti theater in Bergamo. In 2015, he performed for the first time with the Verona Philharmonic, interpreting the most famous opera arias.

FEDERICO PARISI was born in Taormina, Italy, and began studying voice at age 14. In September 2011, he won "The Youngest Tenor of Italy" award, presented by Tenor Pietro Ballo and Soprano Monica Curth Di Stefano. In January 2012, he was awarded the "Città di Taormina" prize. After concerts throughout Sicily and Calabria, in 2014 Federico was featured in the Italian TV’s "Tu si que vales" by Belen Rodriguez and Francesco Sole. In the summer 2014, in addition to classical music concerts, Federico opened the concert dates in Sicily of Italian pop music artists such as Ivana Spagna, Anna Tatangelo, and Giuseppe Povia.

ROBERTO CRESCA began his voice studies at the Conservatory of Music of Santa Cecilia in Rome. In 2004, he made his debut in the opera “Rita” by G. Donizetti at the Teatro Vittorio Emmanuele of Benevento in the role of Beppe. In September 2006, he sang at the Palais de la Bourse in Paris where he received wide acclaim from critics and audiences. In 2008, he made his debut as Cavaradossi in Puccini’s “Tosca.” In the 64th season of the Teatro Lirico in Spoleto, Roberto debuted in Bizet’s “Carmen” in the role of Don Jose. Roberto has participated in international tours in China, Turkey, the Netherlands, Russia, South Africa and Canada. He has recorded for OMA MUSIC the CD "operArias" conducted by Maestro Viktor Karzalis, containing a selection of the most famous tenor arias.

Founded in 2002 by Victor Quijada, RUBBERBANDance Group (RBDG) is recognized worldwide for its innovation, its significant contribution in dance, and for its role in the development of a new dance style inspired by breakdancing, classical ballet, and dance theatre. A one-of-a-kind troupe, RBDG deconstructs the principles of urban dance and mixes style to create their own unique spin. For the past fifteen years, RBDG has been redrawing the boundaries of contemporary dance with its singular language. The company reconciles the spontaneity, fearlessness and risk-taking of hip-hop culture with the refinement and choreographic maturity of the ballet.

DID YOU KNOW ... The hallmark of the company, the RUBBERBAND Method, comprises a unique choreographic vocabulary developed by Victor Quijada? It is now taught throughout the world in university programs, workshops, and master classes. This movement technique emphasizes transitioning from vertical to horizontal and prepares dancers with classical or contemporary training for floor work.

DID YOU KNOW ... Sometimes humorous and at times emotional, Vic’s Mix spans the immense creative territory of Quijada, extracting many jewels from the choreographer’s repertoire? Remixing his own work and orchestrating the clash of urban pop and classical composition, Victor continues to experiment, challenging notions of theatricality and audience reception, ensuring that each of the dancers moving onstage in these highly athletic tableaus exemplifies the RUBBERBANDance Method.

DID YOU KNOW ... The name for the group evolved from the nickname “rubberband” given to Quijada when he was a teenager performing with a rap group, due to his dance style that was loose and off-kilter? During that same period he was being mentored by Rudy Perez, a member of the Judson Church Theatre Group, who helped establish postmodern dance in the late 60’s and 70’s. Working with Perez while still being heavily immersed in the Los Angeles Hip Hop scene is what planted the seeds that would later become his life’s work.